Create an Account - Increase your productivity, customize your experience, and engage in information you care about.

The League's The Municipality magazine is published monthly and circulates to almost 10,000 local elected officials, staff and partners in Wisconsin. We focus on issues that are of interest to Wisconsin's cities and villages and will help to move Wisconsin forward.If you are a local official or staff of a League member municipality and are not receiving the magazine please email the League and we will add you to the subscription list.If you would like to subscribe please use the online order form.  The subscription rate is $25 annually. Please send any transitions, changes, corrections and additions to Robin Powers at email.
NOTE: We cannot publish transitions in all cases. Please review the Transitions Guidelines. 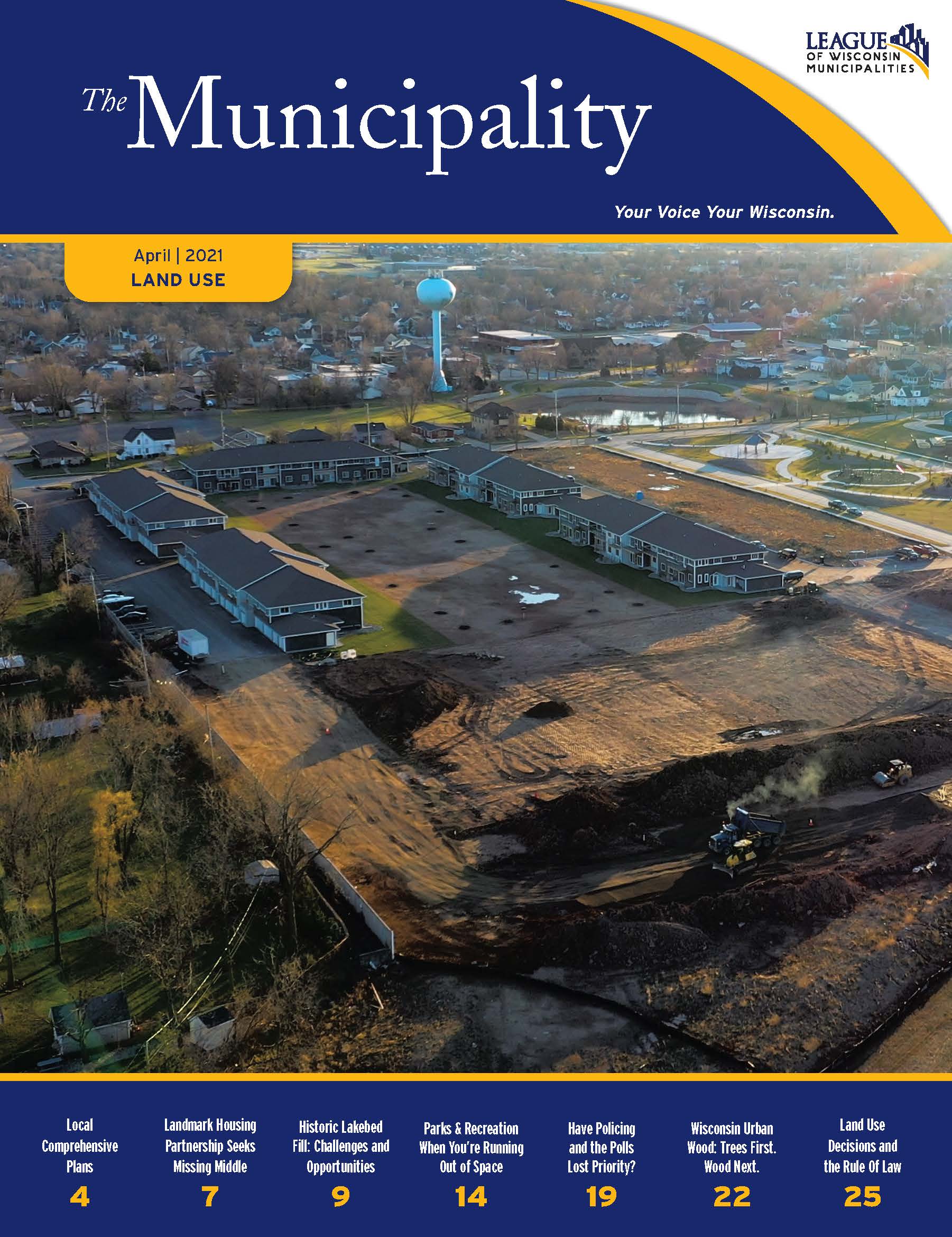 Land use shapes our communities. From Comprehensive Plan requirements to age-friendly design, the magazine covers it all.  Readers are challenged to #TakeYourLeggieToWork and MSA details "Parks & Recreation When You’re Running Out of Space" and McMAHON contributes the cover photo.

Advertise in The Municipality 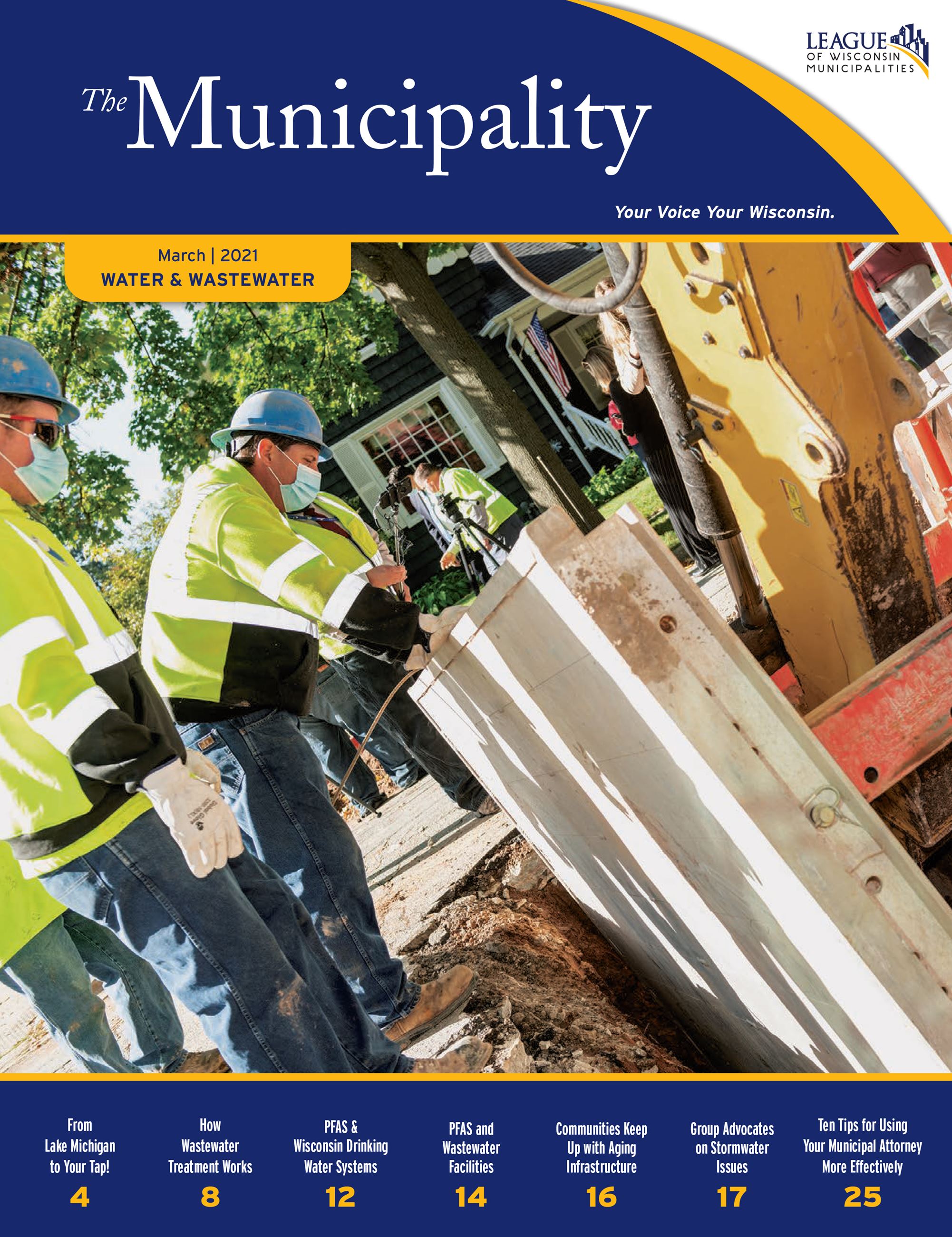 In the category of things we take for granted drinking water and wastewater rank high on the list.  But do you know what happens between the raw water and your tap, or what happens after you flush. No? Then this is the magazine for the municipal nerd in all of us.

The March E-Newsletter with information on the American Rescue Plan, Vaccine availability and much more.

Take a deep dive into the magazine and read the E-Muni.

Transportation in all its forms is topic of this month's Local Perspective. Debby Jackson, Executive Director of the Transportation Development Association is Jerry Deschane's guest. 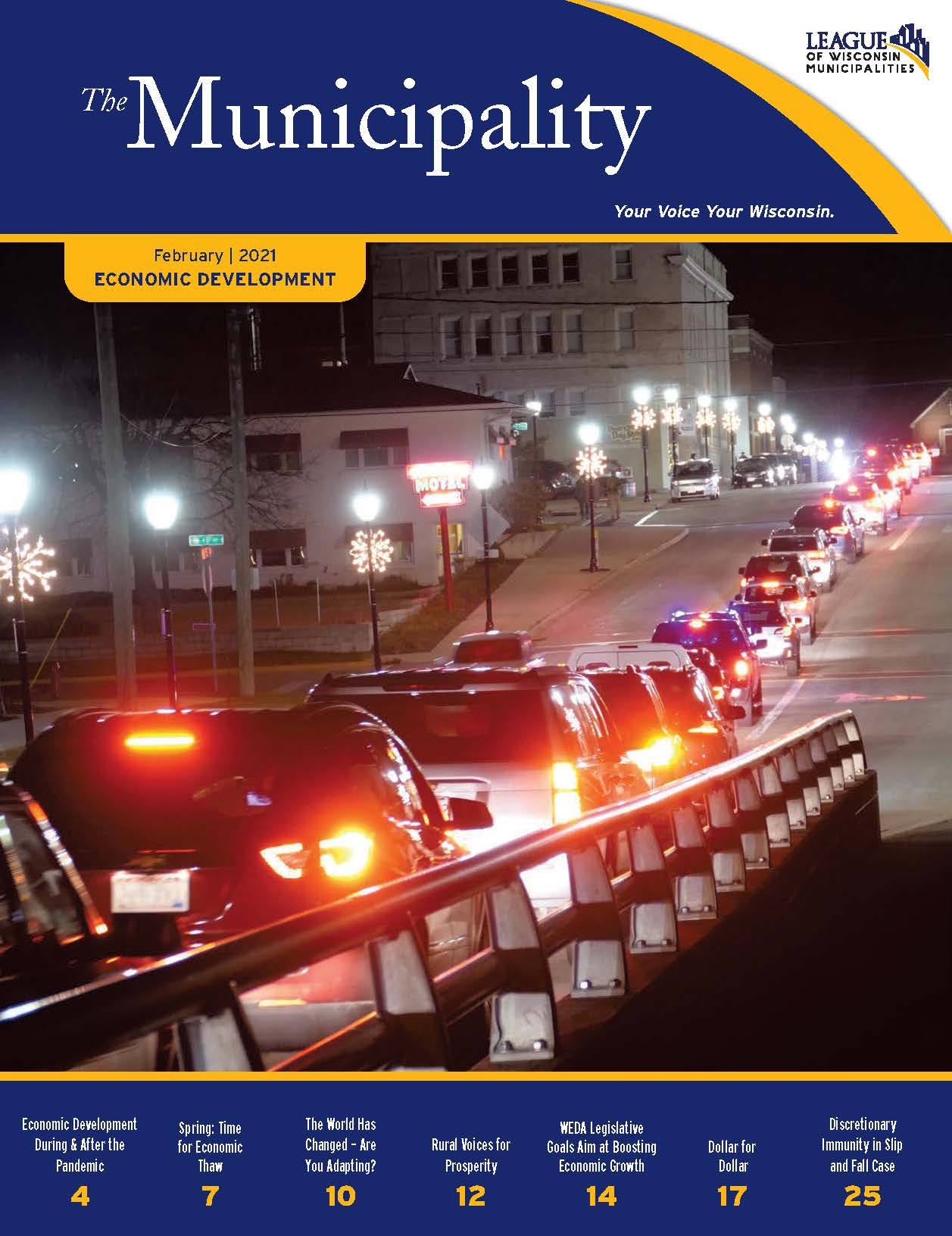 Economic Development is in the spotlight for February with an article by Sturgeon Bay Mayor Ward and one on all the aspects of forward thinking comprehensive plan by MSA's Jason Valerius. In addition, you can read about the WEDA legislative agenda and return to the West Allis pedlet.  The Wisconsin Policy Forum "Dollar for Dollar" report on local government spending is also detailed.

The League's February E-Newsletter with Workshops, Funding and Opportunities.

The League's E-Muni takes a deep dive into the magazine with direct links to resources. 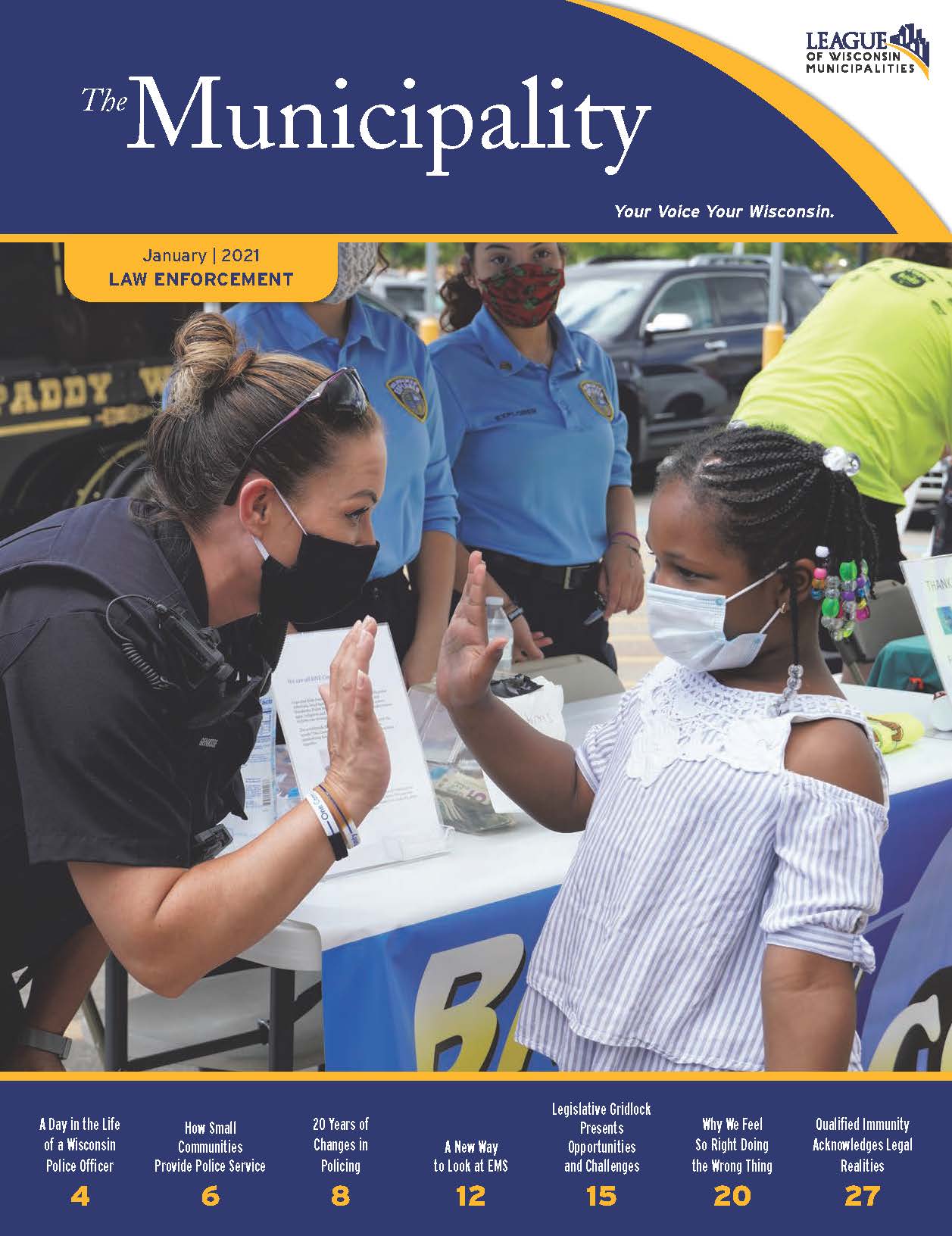 From a Day in the Life of a Wisconsin Police Officer to how law enforcement has changed over the last 20 years, the articles in the League's January magazine provide details on policing in Wisconsin.  We want to thank the Wisconsin Chiefs of Police Association for working with us.

The League's January E-Newsletter with opportunities, events and grants.

The January E-Muni provides online resources and direct links to the legal articles.

In this month's the Local Perspective, Jerry Deschane talks with Chief Ken Pileggi, Chief of Police, City of Jefferson Police Department and the President of the Wisconsin Chiefs of Police Association. 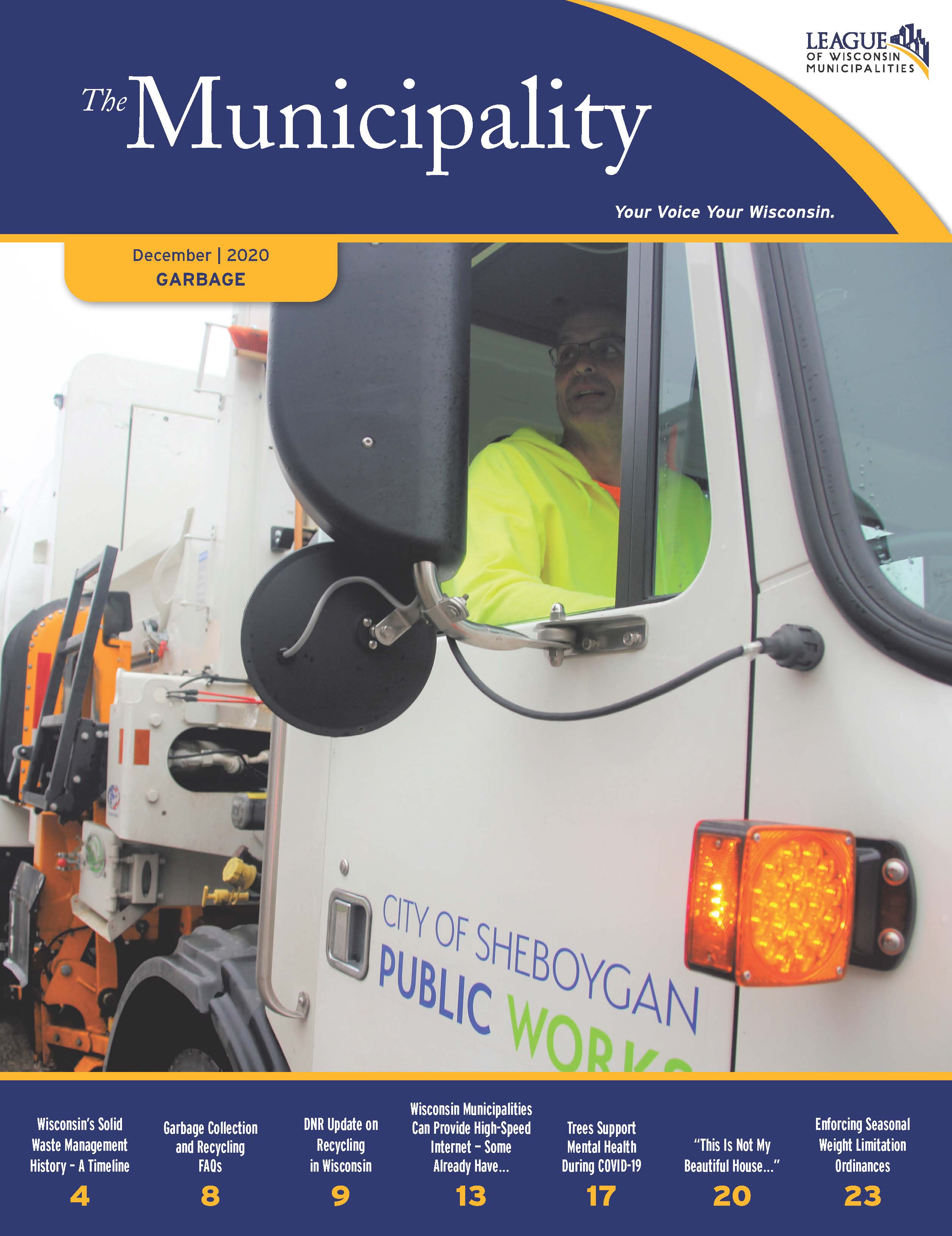 Nothing says Happy Holidays like a magazine focused on garbage!  It's a basic municipal function that cities and villages in Wisconsin provide in a number of different ways and includes a number of different components.  There's also a comprehensive article on broadband and the second article in our series on trees.

The League's December E-Newsletter has a plethora of opportunities, grants and events.

The December E-Muni takes a deep dive into the magazine, but it is not a dumpster dive. 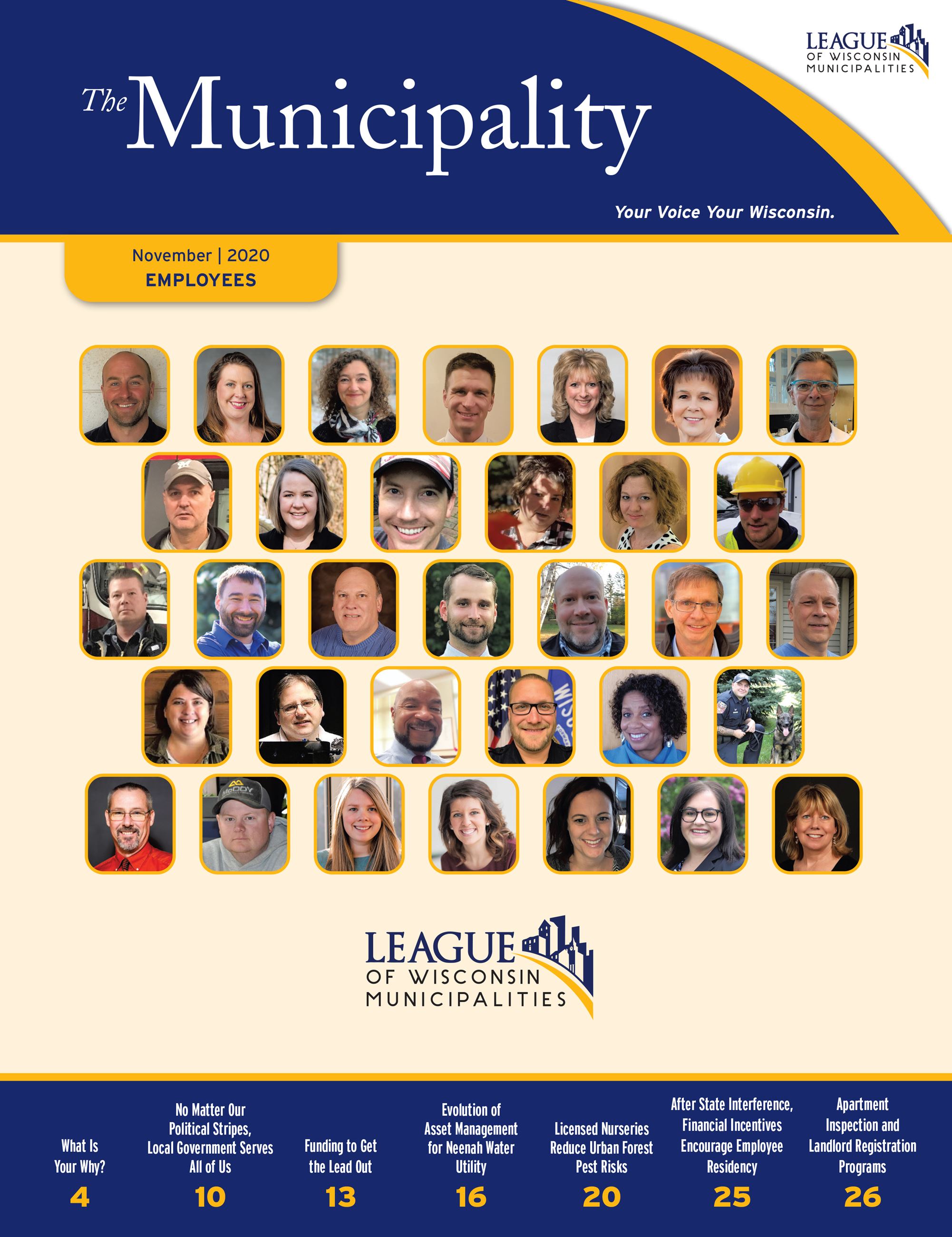 Wisconsin is the vibrant state that it is because of the local government employees who keep everything running in your community.  From the Harbormaster in Lake Geneva, to the Bus Driver in La Crosse and the Librarian in Strum, we feature a small portion of the amazing local government employees working for you in Wisconsin's communities on the cover of the November The Municipality. Open it up and you'll find Jerry's article on "What is Your Why" you work in local government to the Wisconsin Policy Forum Salute Award Winners.  We thank you all for your work!

The League's November E-Newsletter with events, grants and opportunities.

The November E-Muni takes a deep dive into the magazine with extra resources and direct links to articles. 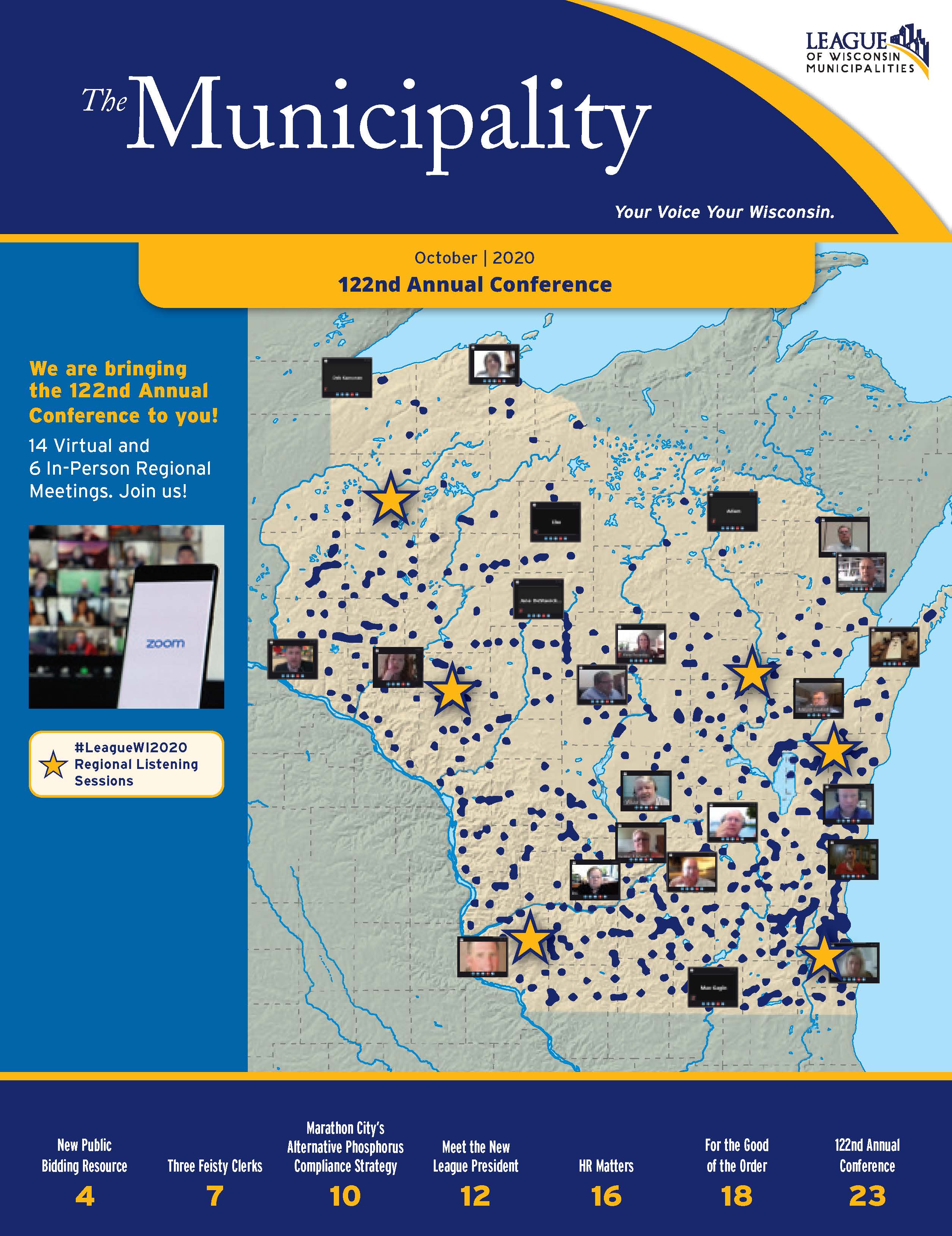 The Annual Conference is coming to you. The Municipality reaches everyone so we made it the Annual Conference Program. Check out the full conference schedule plus all of the extras. Plus you can read about responsiblewisconsin.com, the new responsible bidder database, three feisty clerks and innovative phosphorus solutions.

Opportunities, Events and Grants - it's the League's October E-Newsletter.

The League's October E-Muni with links to all of the articles and additional resources. 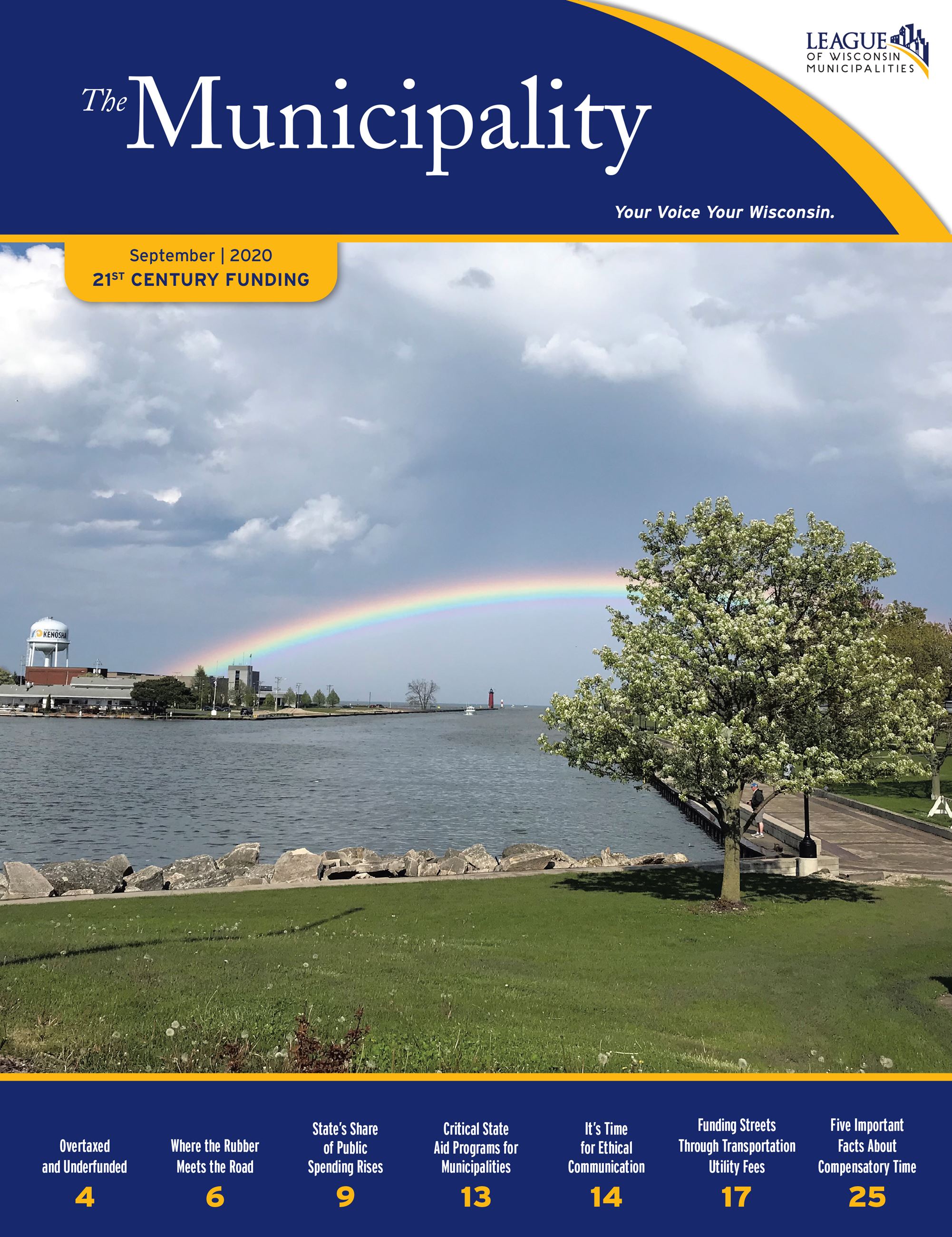 Moving Wisconsin's cities and villages into 21st Century Funding is our focus. As Jerry Deschane stated in his column, "Wisconsin has a growing fixed-income population, yet, irrationally we rely on the unforgiving property tax to fund schools, technical colleges and local government. The lack of a balanced approach to local government revenue leads to the impression that Wisconsin is a “high tax” state, even though overall state and local revenues as a portion of personal income are squarely in the middle among states. Relatively high property taxation drags down our housing market and makes attracting people to Wisconsin difficult. According to research by the Wisconsin Policy Forum, no other state relies as heavily on the property tax. Levy limits are killing Wisconsin. Cities and villages cut corner after corner as sub-inflationary levy limits choke the primary resource supporting first responders and educators. State leaders praise themselves for “holding the line” on property taxes, without having to endure the pain of cutting police officers and deferring critical maintenance. It’s time for an evolution."

The League's September E-Newsletter with Opportunities, Events, and Funding.

The League's September E-Muni, a deep dive into the magazine. 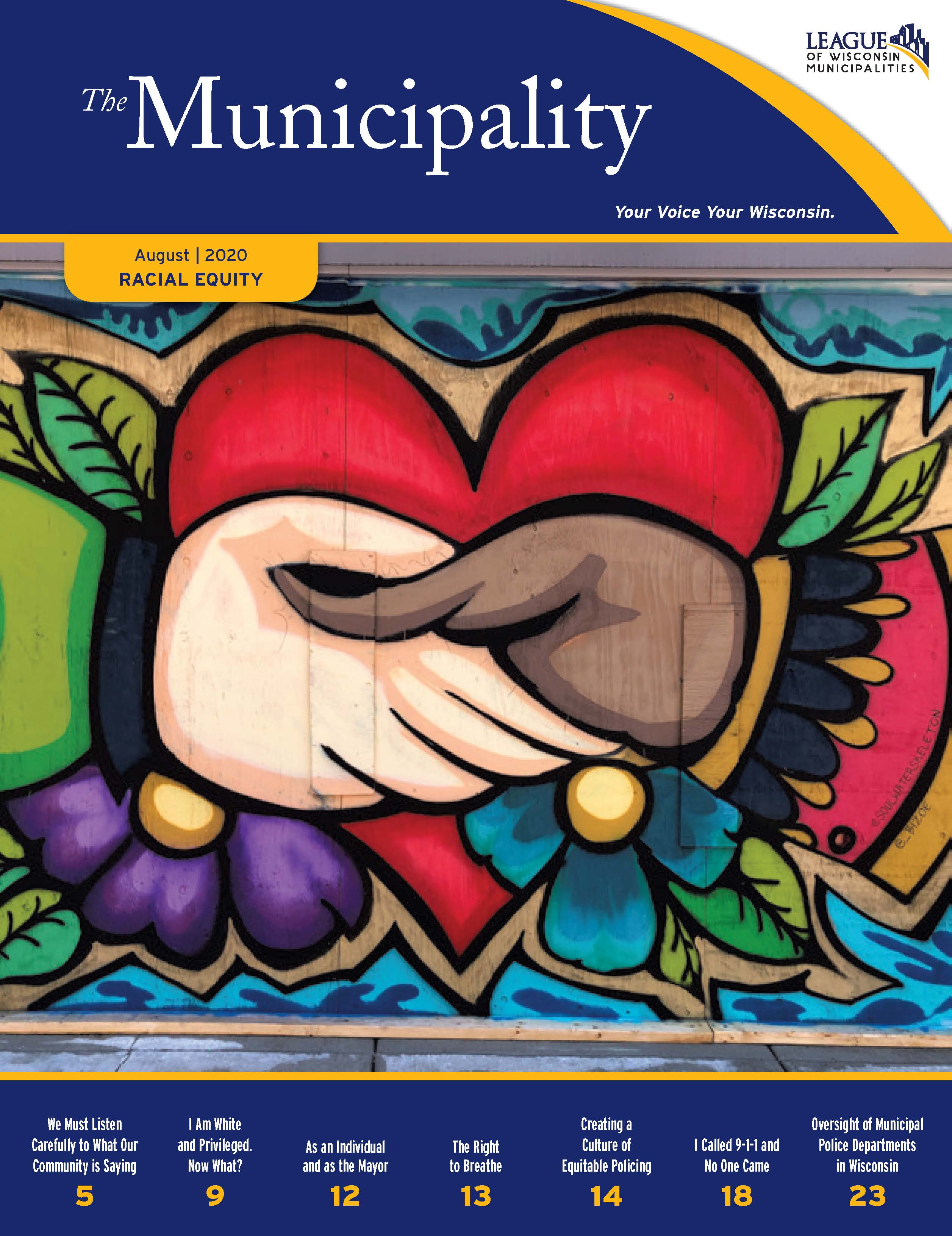 The League takes our role as a convener of the state dialog on racial equity seriously. From the columns by Milwaukee Common Council President Cavalier Johnson and Reggie Jackson to Eric Giordano's "I am White and Privileged. Now What?" and Waukesha Mayor Shawn Reilly's statement, we ask that you read this issue. Join us for the Chief Executive Workshops session on Racial Equity or the Annual Conference Workshop or convene your community,  What role does local government and do you, as a leader in local government, have in moving toward racial equity?

The League's August E-Newsletter with Opportunities, Events, and Funding.

The August E-Muni takes a deep dive into the magazine providing a sampling of racial equity initiatives and statements from communities across Wisconsin. 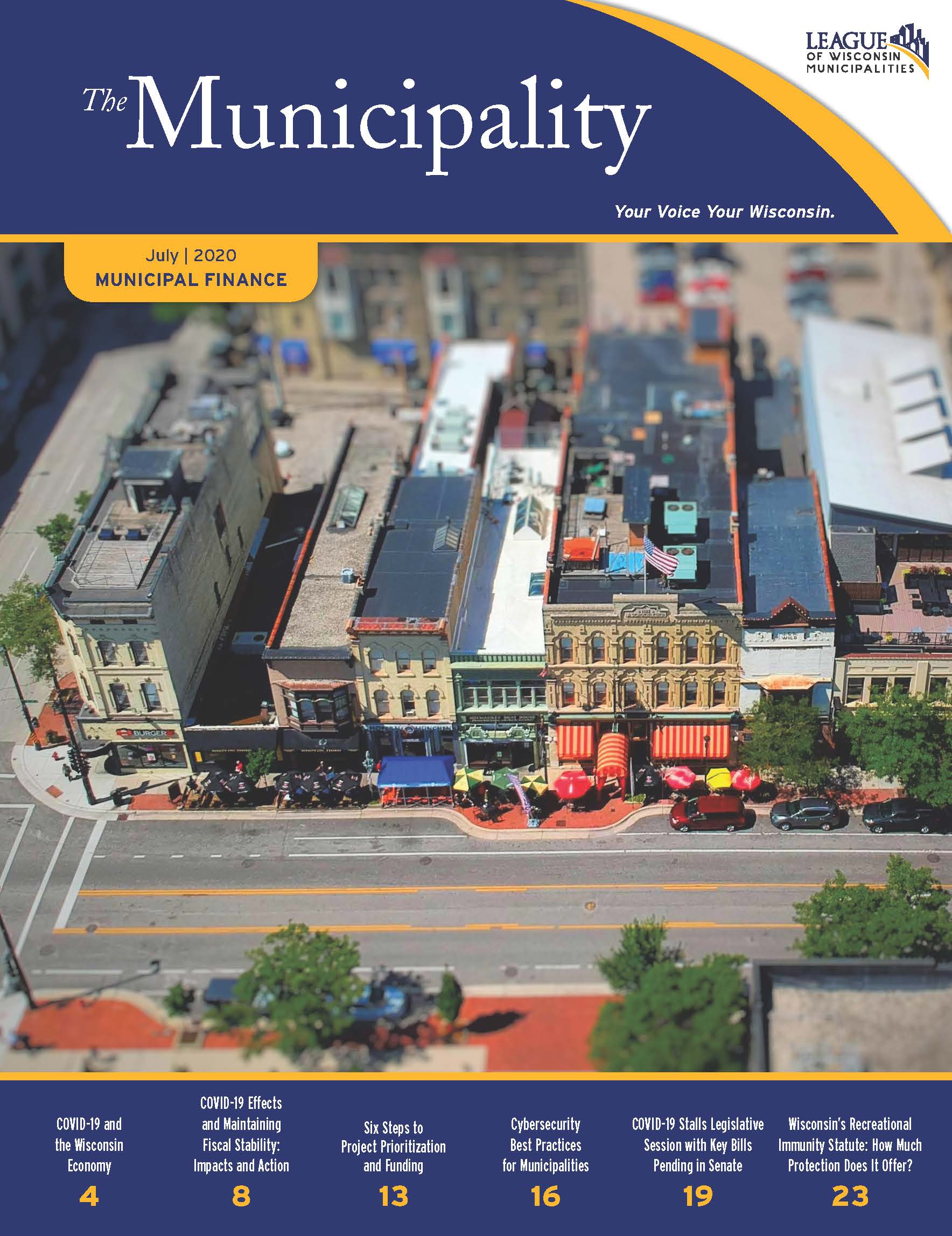 The state of the economy and municipal finance considerations in the age of Covid-19 are the articles that anchor the magazine - authored by experts at the Center for Community and Economic Development Dept of Agricultural and Applied Economics, Division of Extension, University of Wisconsin--Madison and by Ehlers. The 6 steps of project prioritization by MSA and cybersecurity by Incrediblebank round out the articles. Curt Witynski also provides a review of the legislative session to date and Claire Silverman provides an overview of recreational immunity.

The July E-Muni takes a deep dive into the magazine's articles on the economy and provides direct links to the legal articles.

A plethora of Opportunities, Events and Funding are provided in the July E-Newsletter. 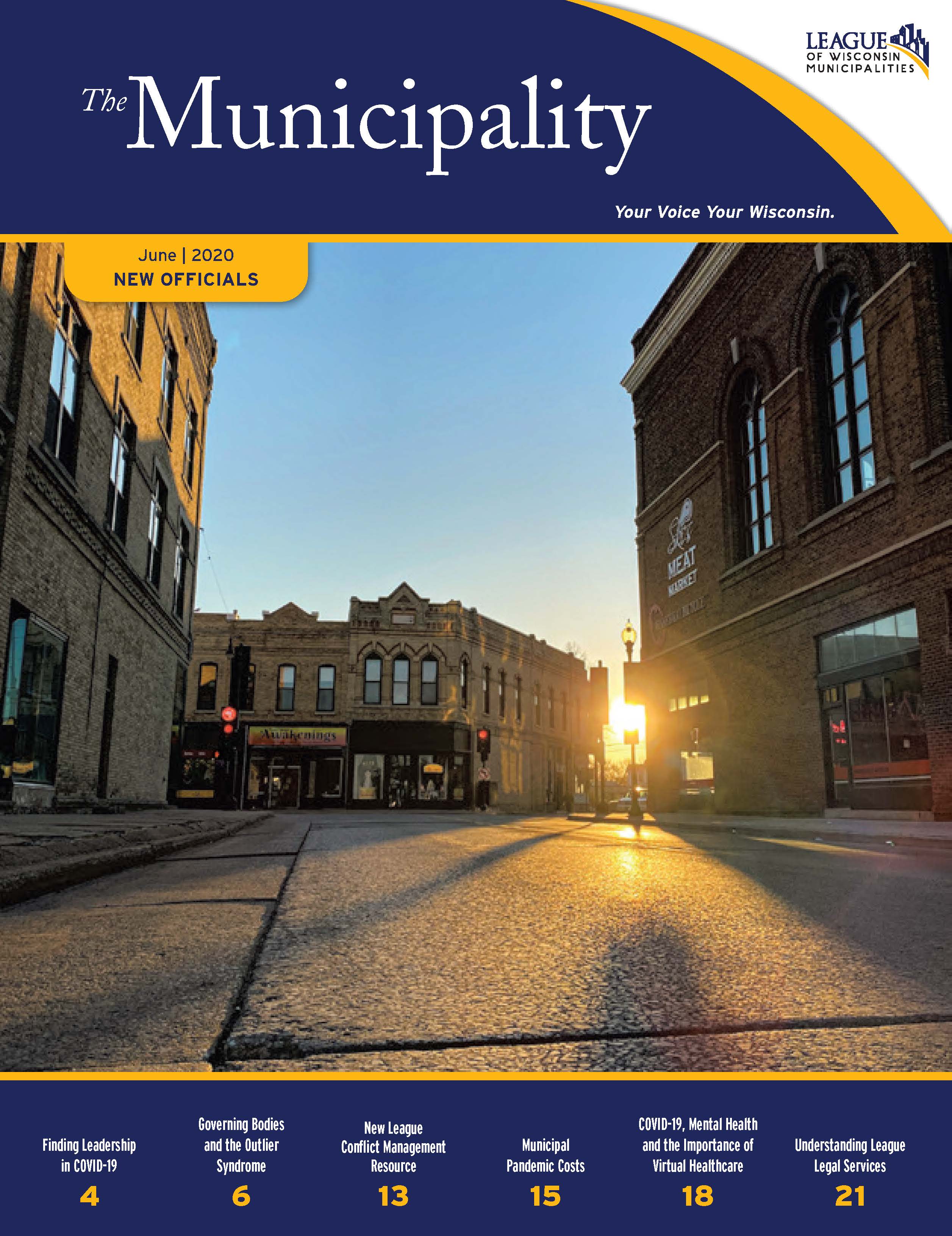 The June issue is focused on new officials and includes articles on leadership, the impact of the pandemic on municipal financing and important legal distinctions that make governing different from running a business.  Every April an average of about 800 officials take office for the first time. Welcome!

The League’s June 2020 E-Newsletter with Opportunities, Events, Grants & Training For You

The June E-Muni, the League’s Deep Dive into the magazine, includes direct links to the legal articles from the March, April and May articles as well as the June issue. 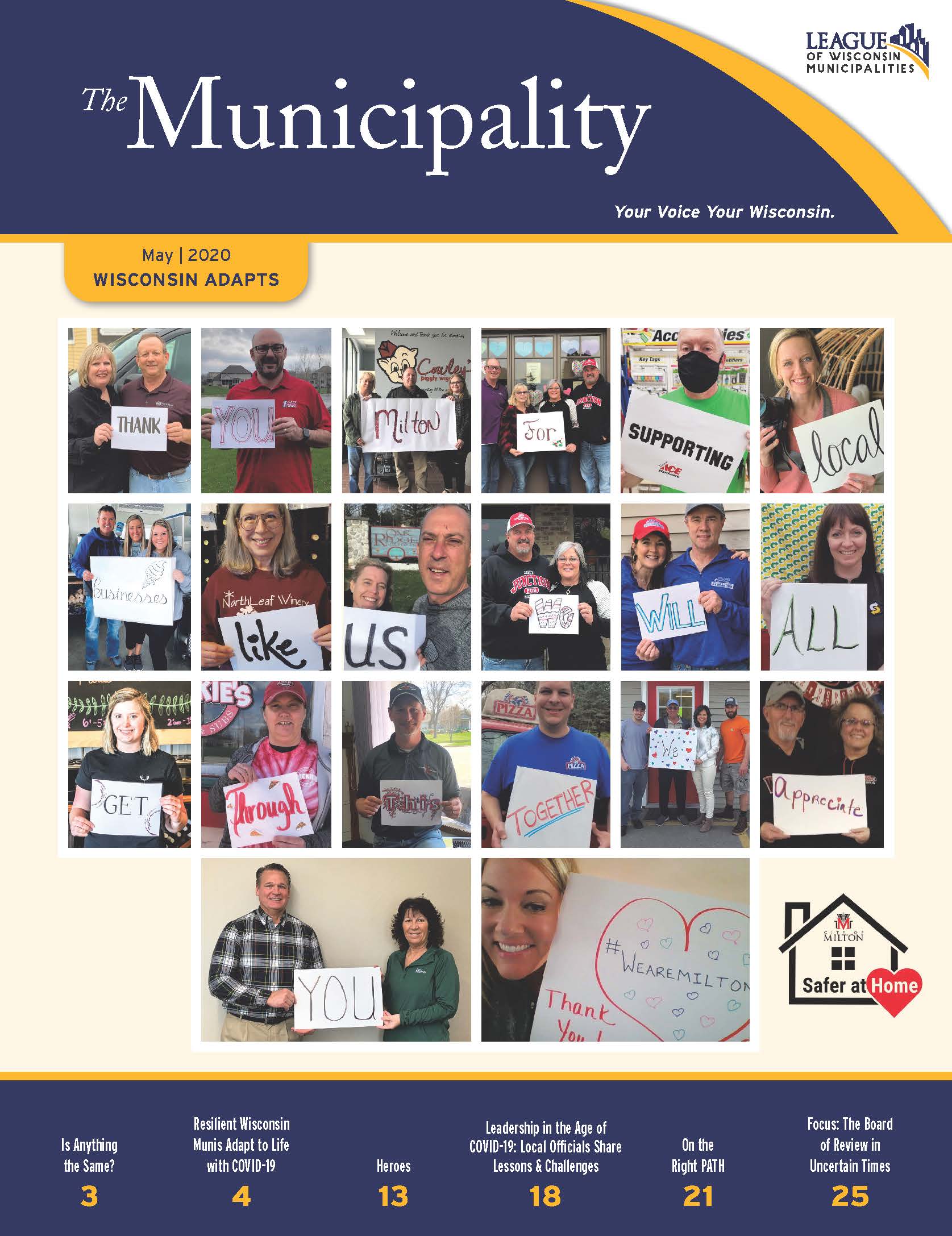 Wisconsin does indeed adapt! The League’s May magazine includes a photo album that depicts life in the first few weeks of the pandemic. Thank you to everyone who provided photos! There are also a lot of screenshots. What stands out is how innovative, resilient and community building local government is in this moment - and frankly always. You are truly leading your communities both through the every day and the extraordinary.

Wisconsin needs more housing for families and workers, for young people and for people who are older. Whether you call it affordable or workforce housing, it is home to someone. The April magazine covers all kinds of housing, covers planning for housing, removing barriers and includes success stories.